Nokia XL is the Finnish firm’s reply to the Motorola’s Moto G. XL which was released along with three other Android devices is the best of the lot and boasts of having a plethora of useful features. The 5 inch display of XL is surely going to dwarf its competitors. The hardware of the device is also carefully planned and consists of a 1GHz dual core Snapdragon processor which runs on 768 MB of RAM and is supported by a 4GB internal storage. At the given price range, this device isn’t a bad setup at all.

Among the big plus point of Nokia XL is the operating system which is build using the open source platform, known as Nokia X Software Platform 1.0.1. Even though it does not look as appealing as KitKat or iOS 7 but it’s definitely has the potential to outrun them. Nokia has given preference to Microsoft cloud services instead of Google Cloud and thus has access to a wide number of applications. These applications are available at Nokia’s store or you can always use the third party stores.

The interface is also quite clean and organized. Like Lumia phones, XL has got tiles on the screen which can be moved around by tapping and dragging.  The movement of tiles is usually smooth, however 768 MB RAM seems less when you multitask on the device. Nokia has also replaced Google Maps as well as Play Music with its own Here Maps, Here Drive etc. You may take some time to get used to the new apps, but the features are almost similar as the other versions. A big screen implies that viewing maps on XL is quite comfortable. 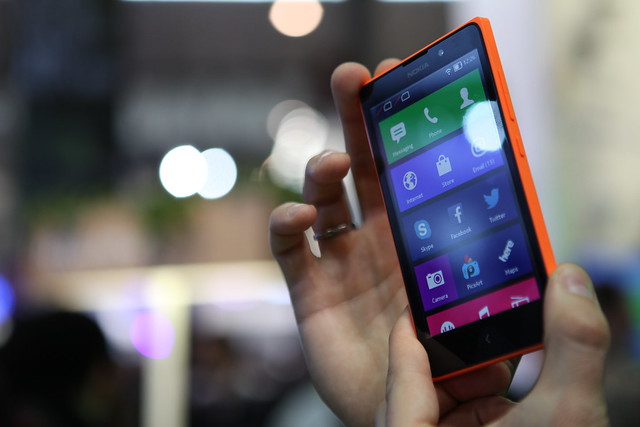 With a resolution of 800 x 480, Nokia XL doesn’t have one of the best displays around, yet it as a decent viewing experience and it performance well for reading text, browsing net or playing games. The design of the device is minimalistic and consists of certain bright colors including yellow, green, blue and orange along with the usual black and white options. Also, with a thickness of 10.8 mm, XL is also a chunky device. The angular edges of the device aren’t too comfortable to hold, however, the mono body look is quite sturdy.

Nokia XL supports dual SIM, microSD port and a removable 200 mAh under its rear hood. The standy time of the device is also quite decent. The speakeris housed at the rear of the device is capable of playing music at a high volume. There is no shutter button on the device; however the camera interface is loaded with some quality features including color effects, face detection as well as controls.

Nokia XL is definitely one device that will find its appeal in the emerging markets. The price tag attached to it is also going to be one of its major plus points.

Author Anzer Khan is a professional article writer and specializes in writing on mobile and technology. Nokia XL is a great product and holds a lot of potential. You will find several attractive deals online. Do watch out for some great contract deals comparison online and save your hard earned money.